Charmer has been an absolute rockstar this last week or so as I've been slowly easing him back into work. I had to move my lesson from Tuesday last week to Thursday with Banner, and it was just pretty horrendous - think temper tantrums every 5 minutes. I left on Thursday feeling pretty frustrated and discouraged, plus being super exhausted after dealing with Banner's antics for the better part of an hour and a half.

After I got home, I wallowed in self pity for a few hours as I did some laundry and watched TV, and after an appropriate amount of time feeling sorry for myself about how miserable our lesson had been, I finally picked myself up and went outside to go play with Charmer. The day was lovely, nearly 50* and super sunny, so I felt guilty if I let the lovely weather pass me by. It was a pretty good thing it was so nice outside, or I would've probably passed up going out. 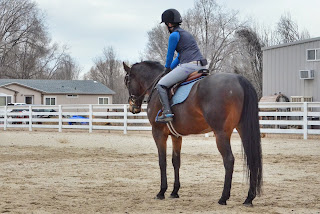 My poor property is still mildly a swamp from having basically a week straight of rain, but the arena footing was reasonable enough to manage a lunge and possibly a ride. I was very grateful for hot water access near my barn when I pulled Charmer out, because his legs were so muddy that I had to hose them off. Once I got him cleaned up, we tacked up and headed out for a lunge. And of course, he decided that everything was suuuper scary on this lunge. 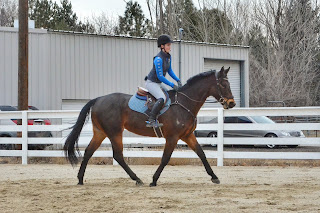 We had a bit more imitation porpoising and general flailing around than usual, but the work he was giving me in between all the leaping and snorting was solid. I'm not really sure why I decided that this was the perfect day to get on him for the first time in 2020, but it was. So I climbed aboard after our little 15 minute lunge, and wouldn't you know it? He was foot perfect. Just walk and trot, and general relearning each other in the tack, but he was fantastic!

Both kids got Friday off because I had too many other things going on to make time for them, but Saturday morning was pretty wide open! The sun went away on Saturday, so even though we had reasonable temperatures, it felt significantly colder, but I managed to convince myself to ride at least one pony anyways. Still feeling a pretty solidly bruised ego from Banner and his horrible behavior on Thursday, made me decide that I'd rather bring out Charmer. 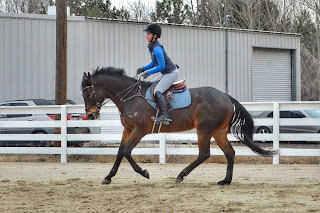 I managed to even rope the husband into taking some photos for me on Saturday morning, which was extra awesome! We did a brief lunge session, but probably our shortest yet - just probably 5-7 minutes of quick w/t/c and making sure his brain was with me.

I climbed aboard, and he felt a bit more wired than he had on Thursday, but still fairly settled and reasonable. We got some good walk work, and I did some brake checks as well. He got a few moments where he remembered how to actually bend around my inside leg and soften a bit. We moved onto trot work, and even though he got a touch heavy on my hands, and we weren't pushing for a big, true working trot, we got some solid work in at the trot. Then, I decided to move on to the canter. He is always a touch explosive in his canter transitions, especially if he hasn't done it under saddle in a little bit, so I always try to do my best to set him up for success. 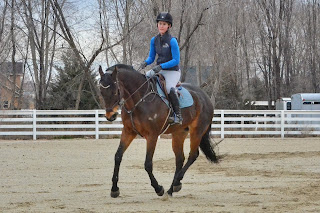 Sure enough, we got a mini explosion and a pretty dull/awkward transition when I first asked, but it was super mild for him. After a lap of canter, we regrouped and tried again. Much less sass the second time around and his transition was a bit sharper - felt less like I was trying to start a pull-to-start lawn mower. Again, we didn't get much work in a true working gait, but it was solid and quiet. 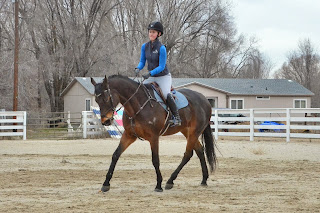 We repeated all of this work back the other direction and again he was a very good boy. A bigger explosion in our first canter, because we were going right this time (usually the way he has a bigger reaction), but it still felt really good.

All of the work I've been doing on my own riding in the last year has helped me to be more aware of my own body position when I'm riding Charmer. I think this is allowing me to bring him back better, and softer than before. I'm thrilled to see what 2020 has in store for me and my dragon child. Hopefully he will come back to full work and be better than ever! 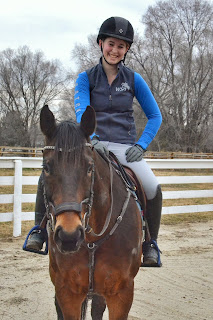