June 16, 2020
Last week, I had an opportunity to go out cross country schooling! Banner and I had a show jumping lesson earlier in the day, so I decided to bring Charmer! Its been over two years since I've brought him out, so I didn't expect much of anything for the schooling, but appreciated the opportunity to get out with him in a low pressure, mellow environment. 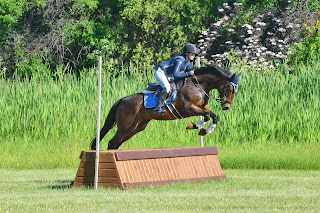 We arrived long before all of the others joining our group lesson, giving Charmer a fair amount of time to settle into the surroundings and let me get him all ready at my own pace. Once some of the other riders arrived, I threw Charmer on the lunge and worked on transitions and just taking in the sights at first. We moved on to roping him over a few of the smaller fences & playing in the water and popped him up and down the banks a bit! 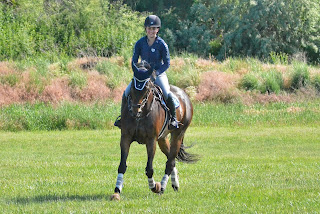 He was distracted and a touch wild but listened well for the most part and was at least jumping nicely! We got to a place where I felt like he was as focused as I could make him on the lunge and decided it was now or never. I got on, and warned the other riders that he may be a touch volatile if anyone rode too close (which everyone was wonderfully respectful of his space) but I definitely just planned on doing my thing. 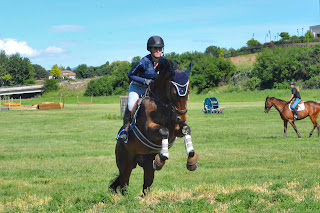 I expected very little from this schooling since it has been SO long since we were last out, I really only expected to pop some BN fences from the trot and maybe play in the water. When we started out, I had an absolute ball of stressful energy. We could only move sideways at points, but I eventually was able to channel his lil psycho energy into small circles and serpentines at the trot until we finally got his brain back in his head. 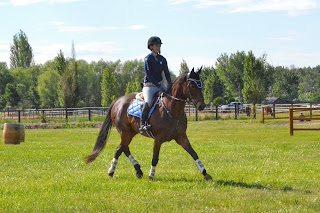 I still definitely only expected to just trot some fences, so we started off playing with the upbank. Charmer has always done really well with terrain questions (banks/ditches/water), so while this wouldn't be the logical place to start with a lot of horses, it worked well for him! He popped very politely up the bank a handful of times before we turned around and hopped back down a bit. The first time was definitely a flyer, but then he remembered solid downbank etiquette. 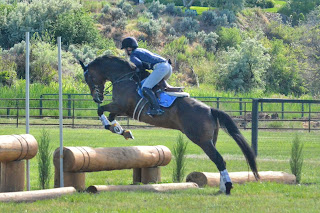 Finally, I felt like I had a reasonably rideable horse at this point, and he was remembering the game and the fact he actually kind of enjoys XC! While everyone else started playing with the banks, we headed over to a small hanging log to play over. He was quite unimpressed with it and popped over like a very polite boy. We started cantering away for longer and longer stretches of time after each jump and he was staying super polite and rideable which thoroughly impressed me!! 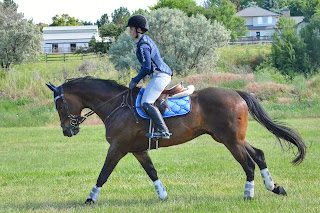 One of the very cool things about having a horse as athletic & brave as Charmer is that the jump is really never the problem. As long as I ride like a half drunk monkey and point at the right fence, he will pretty much reliably jump it. We have issues sometimes on the backside and in-between fences, but its so cool to know that the actual jump itself won't be the issue. 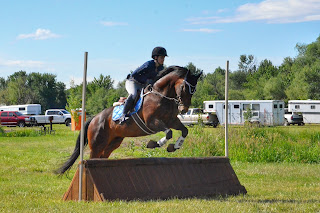 As we continued playing over fences, my confidence (and his) just kept growing, He was jumping like a superstar and remaining soft in the bridle and coming back in my half halts. We finally put together a little course and while I cantered in the middle, I still started off trotting the actual fences, but I did canter him over the last fence of our first mini course! Which happened to be a Novice A-frame, which is actually the first Novice XC jump I've ever put him over, and it absolutely felt like nothing on him, which was amazing! 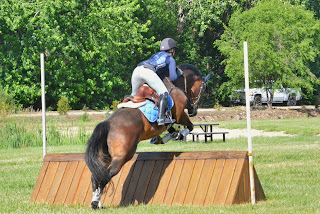 With each fence, my confidence with him just soared higher and higher, We strung together a larger course of beginner novice fences and he tackled each one with ease. One or two of the fences were sticky, but that had more to do with my leg not being on and as encouraging as he needed me to be. I reapproached the fences that were a touch sticky and he was perfect on the second go around every time. 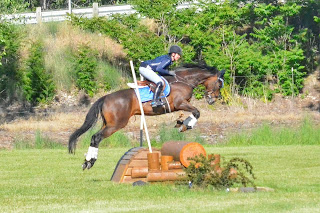 Once we completed our first course, I made a little comment that "wow he wants to make me want to jump some of the Novice fences". So my friend, who was my trainer at this particular outing as well, started giving me some bigger, more challenging courses. Charmer was clearly a little bit surprised by the first couple of them, but once I rode positively and kept my leg on, he jumped the snot out of them. 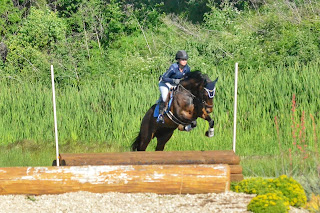 I almost wanted to attempt some even tougher fences with him, but didn't want to push it on his first day back out. We did however play with almost every Novice fence on the property, except for one or two of them. And we ended the day with jumping a jump about one stride out of the water, and doing our first upbank out of water! He absolutely loves the water and was pumped about the upbank! 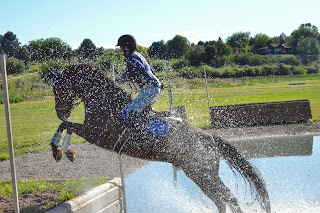 For the first XC outing of the year with him, it was absolutely better than I could have imagined. Half the fences we jumped were bigger than we have ever jumped before together! I'm definitely looking forward to getting him out again and hopefully improving a few of the areas that we struggled a little bit, mostly due to my own lack of trust in him. I'd also love to hopefully hit one of our schooling shows before the year is over to gallop around a couple full courses on him and see how he does! 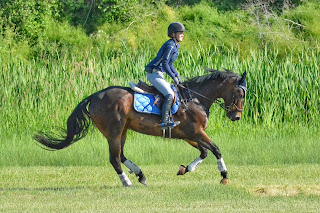