Well. I fell off the grid for like 4 whole months. Whoops.

The sad part? Basically nothing all that exciting has happened in FOUR MONTHS. I'm dying y'all.

Okay, technically a few semi-fun things have happened, but it has seriously been the dumbest freaking end of fall/winter ever. 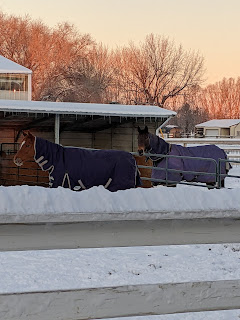 Like the day after Christmas, we got snow...and then more...and then more. For reference, I live in the Boise area in Idaho, where yes, we do get snow, but like...a couple inches at a time max, and it usually melts within a few days. And this time, we seriously got probably 8"+ in the span of like 36 hours. Which was so prettty. For like a moment. But now it is freakin February 1st, and I STILL HAVE 2" OF SNOW IN MY ARENA. Because we basically haven't gotten above like 38* since it snowed, which hasn't allowed anything to fully thaw out.
Soooo, I haven't ridden since sometime in December. And I'm big-time cranky about it (sorry to literally anyone who has to talk to me bc I'm a whiny broken record about this stupid weather). At least all of my kiddos are reasonably happy and enjoying their little break I'm sure!
On the fun side of things though, Charmer got his SI regionally injected for the first time, and wow has it changed him. He's looking like he's got more suspension overall lately, and he had zero reactivity in his hind end for his most recent adjustment which is crazy!! That pretty much hasn't happened...ever. So I'm dying to get back on him, but the weather just refuses to cooperate, so we still have to wait! 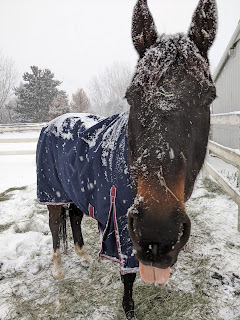 In Banner land, its been pretty quiet. He has been NQR ever since coming home from his lease, and I finally just decided to give him time off, and let him just be a horse for the first time in years while I worked with my vet to figure out how to make my superstar feel like himself again.
We tried injecting his hocks last summer just to see what it would do - he had some mild arthritis going on and we figured this was a quick & easy thing to try for him to see if we could regain some suspension and free up his body again. Especially since he was 12 (now 13) and used hard in his life, it made sense. It got him swinging a bit more behind, but I still just felt he wasn't quite right. Nobody else could really see it (except my wonderful vet, though I also think she was taking my word and knowledge very seriously too) because he wasn't lame, had a pleasant expression, went around politely, etc. But I couldn't shake the feeling he didn't feel like himself.
I think we have finally narrowed down the culprit! He has some markers and reactivity in the base of his neck that wasn't there before, and x-rays showed some roughening and arthritic changes, so our next step is likely going to be ultrasound guided neck injections, which hopefully will get me my pony back!! During our downtime, I was able to pull his shoes for the first time in years as well, and he is gravel crunching sound and happy, which I love! He'll probably stay barefoot for the foreseeable future, as he actually has some really good feet - I've just never had the courage to pull them while he was my main mount, and in regular work, so this was a great time to transition him back to barefoot! 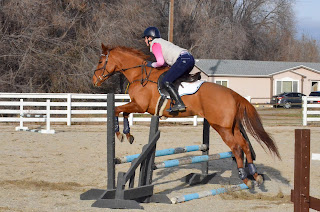 Last but not least, baby V update!! This little lady was going beautifully before our unintentional hiatus. She pretty confidently courses 2'3" at home, and we popped our first 2'6" jumps in November! I didn't want to do anything past 2'6" last year since she was only 4, and a reasonably slow maturing 4 at that, so now that we are in her 5yo year, I'm a bit less worried about taking things super slow.
We popped around our first show in December, which proved to be a bit tough for her - a whole new environment, lots of people & horses, first indoor arena, and new jumps. I didn't expect much from her and I walked away with a horse that I still enjoyed & loved and she still left feeling confident. The indoor jumps were too much, which was fine, so we went to the outdoor ring and schooled, which felt great!! 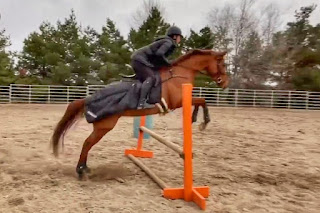 She's got good technique and a good brain, and we will have a more serious program this year (if you know...we can ever ride again haha), which I think will benefit her greatly! My head wasn't 100% in the game last year, and she was young anyways so it worked out to have a quiet program, but I'm excited to see what she does and thinks when we really get some more things done!
Final bit of fun that happened - I did buy her a new saddle! I sold Banner's Devoucoux (many, many, ugly tears were shed, but unfortunately it didn't fit Banner, or anyone else, anymore so it had to go), and replaced it with a Schleese Merci for V. So far she has really really enjoyed it, even though we haven't yet gotten it perfectly refitted to her, but its a much better fit overall than the CWD has been anyways! So we are just waiting until April, when the fitters return to get it resized & reflocked!

The Best Horse in All the Lands

October 19, 2021
Here's the post about my main man, Charmer, from the weekend with my trainer!! I'll go ahead and spoil the ending right now - he is perfect and I don't deserve him.  After where I left off with V (end of yesterday's post) I felt really disheartened when I climbed into the tack on Charmer. He's not exactly known for being the easiest  ride on XC and I sort of mentally was beating myself into a pulp for no good reason. After a good number of comments regarding my leg/balance on V, I was just really feeling like I sucked and had no business being out there. It didn't help that this year has been a complete crapshoot for me and XC and this was only my third time out on Charmer all year.  I halfheartedly warmed him up while thinking we might just not even jump anything. He came out his good ol' dragon self and I was thinking "I don't even have the energy to manage him right now, and I don't deserve to be here anyways". It wasn't a great head
1 comment
Read more

September 21, 2021
Well over the weekend we did a couple of exciting things that I had mentioned were coming up! V & I had a lovely jump school at home on Saturday morning, before a horrendous windstorm blew in. Charms & I also flatted, but no media from that and it was a pretty boring ride overall, so this is mostly about V's adventures. And on Sunday Verge & I had our first "real" cross country school together! V is starting to feel really  confident with the 2'/2'3" stuff, which is super exciting. Of course there are still sticky moments and bumps in the road, but her natural ability and steadily increasing confidence are so much fun. She's typically not much of an over-jumper, which I actually don't mind since it means she's not typically super phased or scared of the fences, but it has made it difficult to actually determine how much scope she really has! Pretty safe to say that she's got some springs in there I think. The oxers definitely can b
Post a Comment
Read more