The Best Horse in All the Lands

Here's the post about my main man, Charmer, from the weekend with my trainer!! I'll go ahead and spoil the ending right now - he is perfect and I don't deserve him. 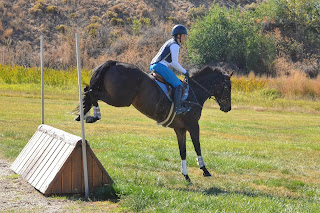 After where I left off with V (end of yesterday's post) I felt really disheartened when I climbed into the tack on Charmer. He's not exactly known for being the easiest ride on XC and I sort of mentally was beating myself into a pulp for no good reason. After a good number of comments regarding my leg/balance on V, I was just really feeling like I sucked and had no business being out there. It didn't help that this year has been a complete crapshoot for me and XC and this was only my third time out on Charmer all year.
I halfheartedly warmed him up while thinking we might just not even jump anything. He came out his good ol' dragon self and I was thinking "I don't even have the energy to manage him right now, and I don't deserve to be here anyways". It wasn't a great headspace, but I'm also too stubborn to let him out-dragon me before we had time for him to settle so I could put away a polite horse. Its a good thing I'm stubborn, even when I'm sad and tired, because it was worth staying on him. 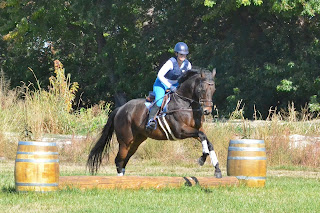 After a few minutes, he still felt like a bit of a dragon but I decided "what the hell, might as well pop over like a single log while we are here and I paid to be here". And to my surprise, he was...civilized?? and...quiet?? and...straightforward?? and I was like "wait what is happening right now?!?"
I did it again to see if it was a fluke or not and it all went great for a second time. I breathed a sigh of relief, knowing that while Charmer can be an absolutely wild dragon of a horse, he also is my other half and we have been partners so long that he feels like coming home. He reminded me that I'm not completely incompetent either, which I really needed after my mental state with my lesson with V at the time. 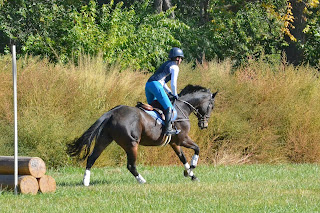 I wandered over to my trainer, who was teaching the other two in my group at the time, and told her I was finally ready to play a little bit with C. After a long hiatus from XC together, I didn't need to do a TON with him (like the Training level work we had been doing earlier in the year when we were both fitter) but I wanted to build up my confidence a little bit and remember what it is like to ride a trained horse out there. 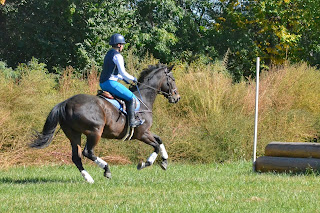 We started off with a little loop over some BN and N logs and rolltops and as we approached the first one and I asked him to sit and collect, he SAT and backed off my hand and his hind end was crazy active and it was incredible. There is no better feeling than the moment that your training pays off exactly when you needed it to. We came around to the second fence and it happened again! He's usually the kind of horse that goofs off a little when I ask him to collect but there was no funny business this day. He was on his A-game.
We repeated the loop backwards and after the first of the 3 fences the other way, I breathed a gigantic sigh of relief and thanked him quietly under my breath. I'm not trying to anthropomorphize too much here, but I'm telling you that he absolutely knew that I needed a good ride in that moment. He carried me like a packer that day, when my brain and body said they were tired and wanted to give up. 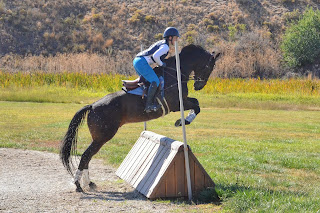 In moments like that, I remember why I love the sport, this horse, all of it. It was an incredible feeling & I am beyond lucky to have great people and even greater horses in my corner. The best part was that I felt incredibly secure, competent and happy in the tack, so I asked my trainer how it looked. And she said my position was fabulous and she had no complaints - which really helped my mental game knowing that a big part of my position issues on V were coming from a tack place and not just a me place. 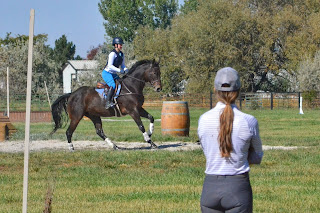 We finished the day playing over even more Novice stuff and Charmer never missed a beat. I realized how far we have come together and that was a fantastic feeling. I didn't take a pull when he got excitable, he didn't bolt or buck when I made a mistake, we were a team. And damn it felt good. 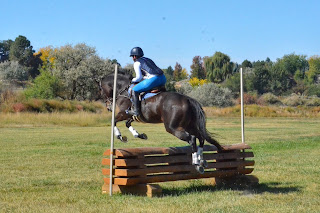 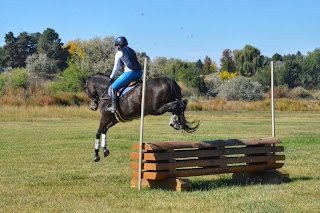 June 16, 2020
Last week, I had an opportunity to go out cross country schooling! Banner and I had a show jumping lesson earlier in the day, so I decided to bring Charmer! Its been over two years since I've brought him out, so I didn't expect much of anything for the schooling, but appreciated the opportunity to get out with him in a low pressure, mellow environment.  We arrived long before all of the others joining our group lesson, giving Charmer a fair amount of time to settle into the surroundings and let me get him all ready at my own pace. Once some of the other riders arrived, I threw Charmer on the lunge and worked on transitions and just taking in the sights at first. We moved on to roping him over a few of the smaller fences & playing in the water and popped him up and down the banks a bit! He was distracted and a touch wild but listened well for the most part and was at least jumping nicely! We got to a place where I felt like he was as focused as I could make him on the lunge
2 comments
Read more