I'm definitely still in a bit of a weird headspace, and obviously still not getting back to real consistency on the blog just yet, but hey, some posts are better than none, right?

All 3 ponies got chiropractic work from my vet a week and a half ago, and she confirmed a fear for me regarding Banner - his lovely Devoucoux saddle doesn't fit. Awesome. Its hitting his scapula, and even with quite a few weeks out of the saddle recently, he still had a lot of residual soreness along his scapula. Luckily I haven't been able to ride 3 ponies lately anyways, so he was on the backburner regardless so it doesn't change much in our immediate plans, but its never fun to know you have to sell a saddle/change plans.

I've got a few different ideas on what I plan to do with selling his current saddle/what I plan to replace it with. I've been toying with the idea of taking B in the pure dressage track, since he's fairly confirmed in most of his 2nd level movements and has toyed with 3rd when we were in regular work. Obviously it all needs major polishing & I would need to actually be able to sit the trot for an entire test, but he's got the brain and reliability to help me get my Bronze. He's not fancy enough for 70+ scores at 2nd/3rd, but I absolutely think we can carve out some solid 60s+ with training and work. 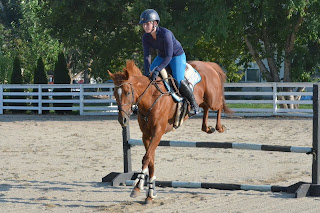 So I'm considering selling that saddle for either a dressage saddle for C or a jump saddle for V. I'm a little torn largely because I'm not sure exactly where to start regarding either one! The biggest draw for me towards getting a dressage saddle is: 1. I haven't had one in years and OMG I MISS IT. And 2. V & C actually seem to fit my CWD shockingly similarly, so I have a feeling (and a hope) that I could make a dressage saddle work for a while on both of them as well, even if it would be mostly intended for Charms. 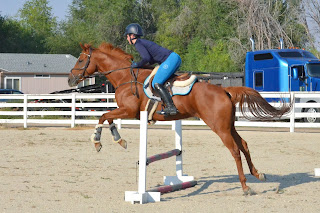 I really really want to go the Equipe route for him, as they make dressage saddles with both carbon fiber trees (Charmer's actual favorite thing) and short tree points (also his favorite) which are both freaking impossible to find in dressage saddles. Unfortunately we have exactly zero decent fitters in my area (sorry not sorry...) and even the ones that are halfway alright are all tied to brands I know will not work for C, so that's absolutely out of the picture. 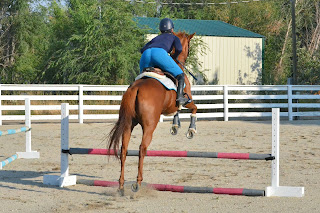 Luckily, I did have a friend that used a decent remote fitter so I'm hoping I can get some help on a direction to go in the Equipe lines for him. But if anyone else knows of a decent remote fitter that isn't tied specifically to a brand (or maybe is brand tied but has stuff with truly short tree points) let me know!

Anyways, outside of my saddle saga woes, Charmer also decided he didn't need to wear shoes on his left feet anymore. He was wrong. Luckily it was already right around the end of his cycle so the farrier came out and fixed him all up. But we had to take yet another brief hiatus for a few days due to him only having 2 of the 4 shoes he was supposed to wear. He's been feeling quite good when we can actually do work, and I've been thriving off of using the new RideIQ app with both him & V. (I'll probably do a review on this at some point, but after only using it 2 weeks, I want to give it more time) 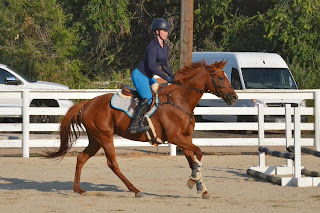 And then of course, my little red mare, who is rapidly becoming the star of the show, and the only one who seems to be able to reliably be in consistent work right now, has been incredible lately (as you can see in the media). She's showing up to work every day and we are even starting to find a little bit of fire in there. Naturally, she's still pretty lazy, but we are finding more adjustability and discovering that she can actually pick up a little bit more speed when asked. 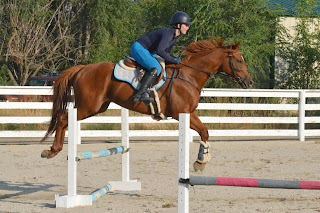 I also have only been jumping her once every few weeks typically, but she retains all of her new knowledge wonderfully and she is definitely starting to understand the game more every time we do actually pop over some fences. Because of all that has happened in my life this year, coupled with the fact she's still just 4, I hadn't really intended or planned to take her to any of the shows this year, but there is one single local HT running in mid-October that I'm lightly keeping my eye on. They run an Intro division which jumps 2'3", which is approximately what I've been doing with her lately and the height is clearly easy for her. 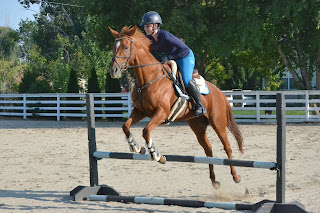 She can get a bit squirrelly and unsure of new fences or fillers still though (100% understandable) so I'm not totally sure we will go, but I'm planning a couple of outings and lessons to try and see if there's any shot at taking her. I won't be heartbroken to wait until next year, as that was the original plan anyways, and I'm really doing my best to make sure she continues to just have positive experiences right now, so if it won't be in her best interest, we will just stay home and keep playing through the winter. It is definitely always fun to have some goal on the horizon though, especially after a pretty aimless year in the horse department for me, and my current still funky headspace sometimes. 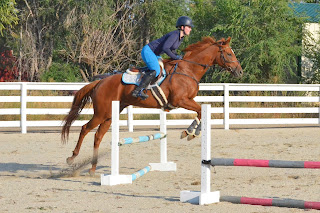 I'm definitely a goal driven person, so even just the idea of something in the near future to look forward to is giving me a purpose and drive for our rides lately, which has been awesome! V is not really one to back off with some extra pressure, but more digs deep to try and figure out what this new goal or purpose is, which is really all you can hope for in a young horse!

I should hopefully have a couple of fun outings/experiences coming up in the next week and a half, so that will make for good blog content! Fingers crossed we can get media from it all as well.

June 16, 2020
Last week, I had an opportunity to go out cross country schooling! Banner and I had a show jumping lesson earlier in the day, so I decided to bring Charmer! Its been over two years since I've brought him out, so I didn't expect much of anything for the schooling, but appreciated the opportunity to get out with him in a low pressure, mellow environment.  We arrived long before all of the others joining our group lesson, giving Charmer a fair amount of time to settle into the surroundings and let me get him all ready at my own pace. Once some of the other riders arrived, I threw Charmer on the lunge and worked on transitions and just taking in the sights at first. We moved on to roping him over a few of the smaller fences & playing in the water and popped him up and down the banks a bit! He was distracted and a touch wild but listened well for the most part and was at least jumping nicely! We got to a place where I felt like he was as focused as I could make him on the lunge
2 comments
Read more