Well I'm nearly 2 weeks late with this post about my little schooling show with Charmer but oh well. Better late than never I suppose. Despite the fact that this show was only 12 days ago, somehow it feels like a lifetime ago as the world seems to continue to get crazier. I know we are all seeing far too many posts about all of that, so I'll try to keep this post a bit happier and away from the craziness of life for the time being. 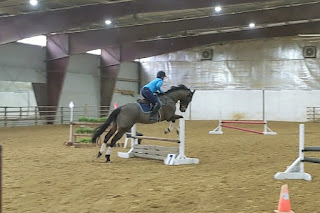 We left off in my last post with me getting Charms back into a bit of a program and jumping some little fences again. Throughout the week leading up to our final winter series show (on March 14th), Charmer and I did some nice little conditioning rides and a lot of work on getting his hind end under him and being softer in the bridle. I did pop him over a couple of fences the night before the schooling show just to make sure that I didn't have fear of imminent death for taking him out. He popped fences like a civilized creature and remained nicely soft in the bridle.

On Saturday morning, we loaded up and headed out. I'd given him a good amount of time in his Back on Track blanket overnight to help keep him loose in his body. He unloaded a bit on high alert, but nothing bad at all. The weather was supposed to be drizzly and grey all day which was a bit unfortunate, but luckily this is an indoor show anyways. The rain had held off for the most part, but as I was almost done tacking up, it started raining on us a bit. I quickly finished tacking and got on in order to keep my tack as dry as possible. 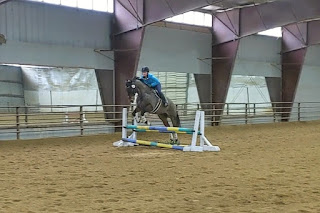 We headed to the large outdoor warmup ring. Which honestly is one of my least favorite rings to ride in probably ever, but it does the job. The footing was even deeper than I remember it being in several spots (only good for walk work in a couple places), and its an incredibly distracting location. Two of the edges are trailer parking, which isn't that bad, but one end butts up against a large dirt paddock with several mules & donkeys, and one long side has a large row of pine trees between you and a bunch of cows (so the horses hear them but don't see them). I always factor in that I want to do as little work in the outdoor as possible because especially for Charmer, it winds him up more than relaxes him.

We spent about 10 minutes in the outdoor, doing only walking, laterals and a bit of solid trot work before I headed to the indoor to pop a few fences (there is open warmup inside but they ask you to be ready to jump before you head in). I got wonderfully lucky to head in as a large group of riders left the ring, leaving just me and one other little girl. The less horses in the ring the better typically for Charmer. I took one lap of canter each direction and he felt softly forward both ways. He was still just a touch on edge but no longer felt like a bomb about to go off. 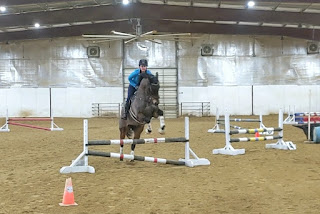 This was my first show in 18 months on Charmer and so I wasn't entirely sure how he would react to jumping these fences again. Nearly every fence had a filler, there were a couple of oxers, and most fences were a part of some sort of related distance. Good ol' super prepared me hadn't schooled any of those things (lol!). To be fair, none of these things have been an issue for Charms in the past, and it was a last minute, lowkey show so I wasn't super worried.

I headed around and pointed him at the most bland of the designated warmup fences, a basic brown vertical with an unimposing plank filler. And he jumped it like a school pony. I wandered around and jumped the other 3 warmup fences (2 oxers and 2 verticals with plank fillers). Good boy C didn't even bat an eye at a single one. We cantered a few of the fences and did one related line and called it quits before we had even jumped 10 fences. 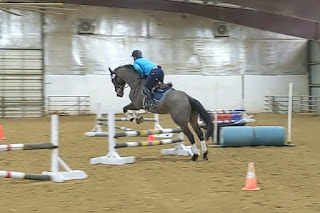 I headed out to wait until the classes began. Luckily I was first to go and only had about 15 minutes to wait. They let me in the ring with 5 minutes to go and I got some nice time to wander around. I'd signed up for two rounds at 2'3" just to have some fun! The first round, I mostly trotted into the fences and honestly probably held him back a little bit. He was absolutely a perfect boy despite the inkling of distrust I had (for no good reason at all). I left the ring with a BIG smile on my face.

We waited for about 4 other rides and headed back in for our second round. I decided to canter this time around and it was fun! A few sticky moments when we had to change our leads and such but he took smart distances to every fence and never got wild. I gave him all the pats as we headed out of that ring. The classes were huge, and its a schooling show, so I didn't go for a ribbon or wanting one at all, and we didn't get one for our times, but based on how happy I was, you would've assumed I'd just won grand champion or something. 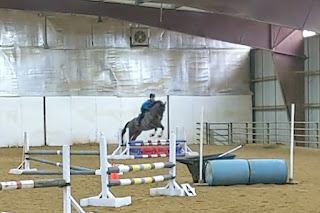 He felt so good that I nearly considered going in for a 2'6" round but I figured that was unfair to him and pushing my luck, as we hadn't really schooled that height consistently since he's been back in work. It was such a great feeling to end wanting more!

Unfortunately shows, life, and lessons seem on hold indefinitely (as Idaho is under 3 week shelter-in-place like much of the rest of the country & world). But I'm planning to continue working on things at home with the boys during this break from everything else! I can't wait to hit the show ring again sometime in the next few months hopefully with Charms!
Posted by OTTB Charm at 3:45 PM